Since 1988, the Amy Adina Schulman Memorial Fund has sponsored an annual lecture on a relevant and timely topic related to the Fund's educational mission. Take a moment to read through this list of past lecture titles and presenters to understand how we continue Adina's commitment to a vital and secure Israel infused with the value of Tikkun Olam- social justice, including equality and human rights for all, pluralism, and environmental justice. 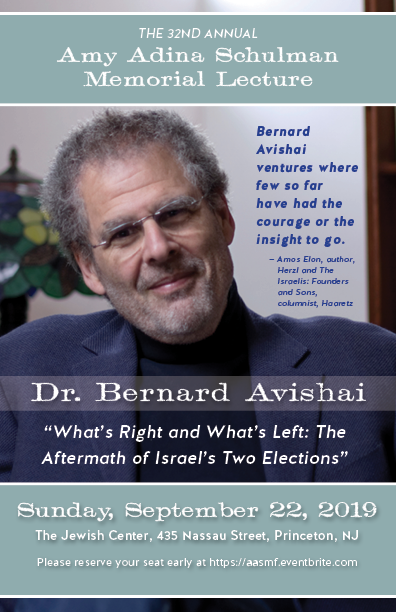 The lecture took place at The Jewish Center in Princeton, NJ at 2:00 pm. It was a free ticketed event. Doors opened at 1:30 pm. The lecture, including Q and A, was followed by a dessert reception in the Center lobby.

“Shifting Sands: US, Israel and the Middle East”
Thomas L. Friedman, New York Times foreign affairs columnist and best selling author, renowned for his direct reporting and sophisticated analysis of complex issues facing the world. Foreign Policy magazine states that “Friedman doesn’t just report on events; he helps shape them.” Winner of three Pulitzer Prizes, Friedman has covered the monumental stories from around the globe for The New York Times since 1981. 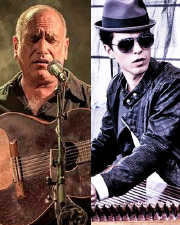 “Inside Israel: Jewish Arab Relations Within a Regional Context”
Mohammad Darawshe, Director of Planning, Equality and Shared Society at the Center for Shared Society at Givat Haviva in Israel, a program of the United Kibbutz Movement.

"Understanding the Results of the Israeli Election:  What Direction for Israel's Future"
Bernard Avishai, Professor of Government at Dartmouth College and Adjunct Professor of Business at Hebrew University. Avishai is a Guggenheim Fellow and author or "The Tragedy of Zionism, A New Israel", and "The Hebrew Republic," as well as articles on politics, business, and the Middle East conflict.

"Jerusalem and the Two-State Solution: Breakdown or Breakthrough"*
Daniel Seidemann, Founder and Director of the Israeli Nongovernmental Organization Terrestrial Jerusalem.

"The Journey Towards an Inclusive and Pluralistic Israel"
Anat Hoffman, Human Rights Activist, Executive Director of the Israel Religious Action Center, Chair of Jerusalem's Women of the Wall, and former Jerusalem City Councilwoman.

"From the Front Lines - Grassroots Social Justice Activism in Israel"
Dr. Michael Walzer, Professor Emeritus in the School of Social Science at the Institute for Advanced Study in Princeton and author of Arguing About War (2004). Dr. Walzer is also the editor of Dissent and contributing editor of The New Republic. In addition, Bruce Temkin, the New York Director of the New Israel Fund, spoke in place of Daniel Sokatch, the CEO of NIF, who was unable to be in Princeton that day.

"The U.S., the Peace Process, and Us"
Dr. Leonard (Leibel) Fein, ( z"l ) Writer, Teacher, Columnist and an independent voice fully immersed in the American-Jewish and Israeli communities. A founder of Moment Magazine, he served as its editor and publisher for 13 years. He is also the founder of the organization Mazon: A Jewish Response to Hunger. His text on "Israel Politics and People" was required reading in all Israeli universities for ten years.

"Morality, Strategy, and the War on Terror: Israel and the Goldstone Report"
Dr. Moshe Halbertal, Professor of Jewish Thought and Philosophy at Hebrew University, Jerusalem. Visiting Professor, Harvard Law School, Penn Law School, and the Global Law School Program at NYU, as well as a prize-winning author and recipient of the Rothschild Foundation - Goren Goldstein Award for the Best Book in Jewish Thought, 1997-2000.

"Water and Peace in the Middle East: Crisis and Opportunity"
Gidon Bromberg, Founder and Israeli Director of Friends of the Earth - Middle East. Honored by Time Magazine in 2008 as a Hero of the Environment for work described as a model for peace and environmental programs in developing cross border community programs between Jordan, the Palestinian Territory, and Israel. www.foeme.org

"The Crisis in Israel's Legal System"
Professor Amnon Rubinstein, 2006 Israel Prize Laureate, described as “the father of constitutional law in Israel…few can equal his contribution as a public figure, member of the legislative and executive branches of government, and a brilliant researcher and legal expert.”

"The Clash of Ideology and Necessity in the Israeli-Palestinian Conflict"
Dr. Yaron Ezrahi, ( z"l ) Professor of Political Science at Hebrew Univeristy and Senior Fellow Emeritus at the Israeli Democracy Institute in Jerusalem. One of Israel's foremost political theorists, noted commentator on Israeli affairs, distingushed by his twin passions for Jewish tradition and the tradition of liberal democracy.

"Liberty and Security: Israel in the Age of Terrorism"
David Horovitz, Editor of The Jerusalem Report, Author of Shalom Friend, the 1996 biography of Yitzhak Rabin and winner of the U.S. National Jewish Book Award for non-fiction.

"Can There be a Narrative for America, Israel, and the Arab World that Gives Dignity to All Three?"
Dr. Stephen P. Cohen, ( z"l ) Foreign Policy Expert, President of the Institute for Middle East Peace and Development and National Scholar at the Israel Policy Forum.

Four Fund Grantees:
Beth Jacowitz - first-year rabbinical student working with Ethiopian immigrants in Jerusalem
Talya Weisbard - intern with the Jewish Organizing Initiative in Boston; engaged in building bridges between the African American and Irish communities
Aiton Goelman - intern with the Israeli Supreme Court; currently serving as an Assistant U.S. Attorney investigating and prosecuting violent gangs in Manhattan, the Bronx, and other counties in New York
Dafna Hochman - worked with the U.S. Institute for Peace and Seeds of Peace projects in Israel; currently Deputy Director of the Terrorism Tracking Project at the Council on Foreign Relation in Washington, D.C.

"Beyond Clericalism? Religion and State in Israel"
Dr. Menahem Lorberbaum, Scholar, the Institute for Advanced Study in Princeton and Professor, Tel Aviv University.

"Can Israel be Both Democratic and Jewish?"
Dr. Ruth Gavison, Hebrew University Professor and Founder and President of the Association for Civil Rights in Israel (ACRI), 2015 winner of the Israel Prize.

"Hiddent Children of the Holocaust"
Dr. Deborah Dwork, Professor and Director of the Center for Holocaust Studies at Clark University.

"Can the Middle East Peace Talks Lead to Peace?"
Dr. Naomi Chazan, Knesset Member and Chair of the Truman Institute at Hebrew University.

"The Impact of Orthodoxies on the Israeli Elections and the Peace Negotiations"
Dr. Janet Aviad, Professor, Hebrew University and Israeli Director of the Charles R. Bronfman Foundation.

"Poems, Dialogues, Struggling with the Other: Tracing One Woman's Journey in Jerusalem"
Merle Feld, Playwright and Poet.

"Out of the Wildnerness into the Promised Land: Israel's Women after 40 Years of Statehood"
Dr. Alice Shalvi, First invited lecturer - Founder of the Israel Women's Network, Founding member of the New Israel Fund, and Principal of the Pelech Religous Experiential High School for Girls.